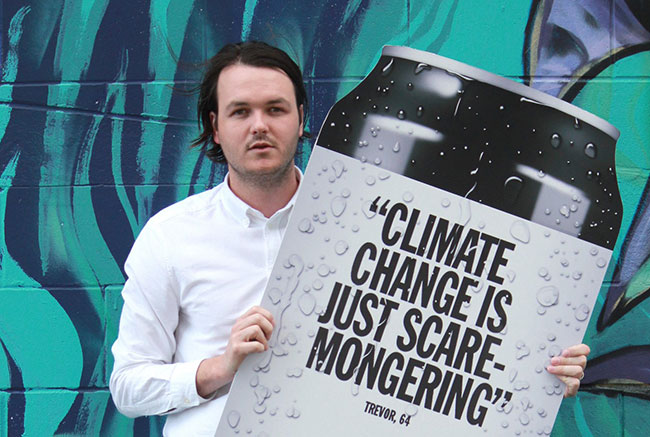 Wave CD Craig Parker said: “‘Your generation can’t take a joke’, ‘Climate change is just scaremongering’, ‘You could afford to buy a house if you stopped buying all those fancy coffees’ and ‘We had a harder time than all those jumped-up spoilt brats’ are real ‘boomer’ quotes sourced from the dark depths of internet comment sections and ‘letters to the editor.

“The call to ‘Outvote boomers’ is driven from the insight that there are currently more people under the age of 55 living in Tauranga than those over 55. If all the younger generations vote, they will outnumber the number of boomers who vote.

“While some people may think Tauranga lacks diversity or is a ‘retirement village’ we know that’s not true! There is a large number of young people to reach to encourage them to have a say in how the city is run.

“The number one problem is that young people don’t usually talk about voting. We needed to break into conversation in a way that they would actually listen – not just through a traditional advertising campaign.

“We needed to come up with a campaign that would push the boundaries and get youth talking about voting and keen to have a say. We decided the best way to start a conversation about politics was to get right to where social circles are already talking – over a few drinks.”

“We presented four creative ideas – they voted unanimously on ‘Brews’. The cans are a great mechanism to get people talking about voting.”

“The Wave team hosted workshop sessions with members of the Youth Advisory Group to develop a campaign that aimed to get disengaged youth more interested in the local body election voting system which is seen by many as ‘archaic, complicated and old-school’.

“The Youth Advisory Group told us most young people have never even posted a letter, let alone a voting paper! We had to think of another way to make voting cool and accessible.

“We presented four creative ideas to the group, and they voted unanimously on Brews to Outvote Boomers. The cans are a great mechanism to get people talking about voting.

“I’m personally passionate about seeing more young people in Tauranga voting so anything that can get more people in the community talking about the importance of voting is a winner.”

To help young people understand the voting process Wave also designed and built a microsite (scroll down for the link).

Mount Brewing Co. owner Glenn Meikle says the long-established local brewery was keen to get behind the idea as soon as they heard about it. “Tauranga is a vibrant young city and we wanted to support a talented group of young people driven to make a positive change in the way our city is run. We look forward to getting the voting conversation started over a few drinks!”

The limited-edition brews are available from today until October 12 (or until they sell out), from Super Liquor (next to The Rising Tide at 107 Newton St, Mount Maunganui), and at a free public ‘Party/Vote’ event at Our Place, Tauranga, on October 4, featuring music by DJ Kapisi, cold brews for sale, and give those who have not enrolled to vote or received voting papers in the mail the chance to cast a special vote between 5pm-8pm.