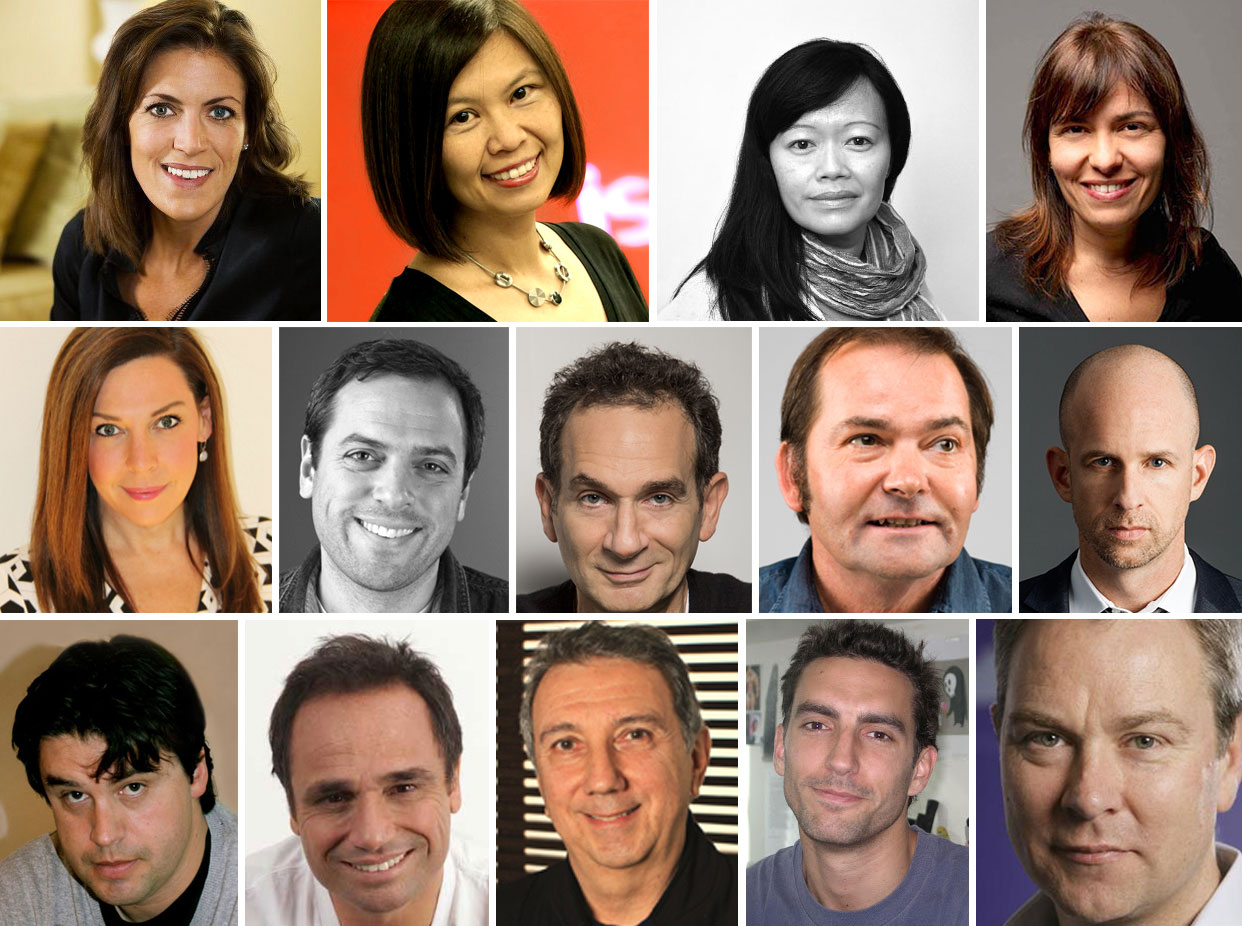 The Cannes Lions Festival has announced the presidents who will lead juries at the 2015 awards. “We have always selected the most awarded, respected global creative leaders to guide our juries,” said Lions Festivals chairman Terry Savage. Sadly, no Kiwis made the cut (although there’s one Aussie).

“This year, it is particularly exciting to see so many women numbered among that elite group. We are looking forward to a time when there is true gender balance in the industry and this will be unremarkable, but in the meantime the female representation is something that we are passionate about.”

BRANDED CONTENT & ENTERTAINMENT: David Lubars, Chief Creative Officer, BBDO Worldwide, Chairman, North America. Lubars has won over 90 Lions, 4 Emmys and over 100 One Show pencils.  Under his leadership, BBDO is among the most awarded agency networks in the world and is currently ranked #1 for creativity in The Gunn Report. “To me, it’s the most exciting part of Cannes Lions right now and maybe the most important. All these different areas are smashing up against each other really fast; the category helps give context and horizon lines.”

CYBER: Jean Lin, Global CEO, Isobar. Named as one of 30 Women to Watch by Advertising Age China, Jean Lin became Global CEO of Isobar in early 2014 and leads the Dentsu Aegis Network agency in over 42 markets, overseeing 69 agencies. Jean was most recently named one of the region’s Top 5 CEOs by Campaign Asia Pacific. “We are living in the most exciting of times in our industry and the digital landscape has never been at more of a tipping point, into the era of Brand Commerce in which digital technology infuses brand experience with transactions and innovation. It is the perfect time to take up the presidency of the Cannes Lions Cyber Jury – witnessing the redefinition of digital creativity. I am honoured to lead a jury of my peers and excited to see work and ideas from across the world.  At Isobar, we strive daily to deliver what we call “Ideas Without Limits” and this is the lens I will view entries through and will ask my fellow jurors to do the same.”

DESIGN: Andy Payne, Global Chief Creative Officer, Interbrand Group. Under his leadership, Payne guided Interbrand to become one of the most highly awarded brand design consultancies in the world. “I hope as a jury we can champion the value of design – yes celebrate the beauty and the craft but understand that the true value of design is in ideas – ideas that move companies, organisations, brands and people forward to better and more inspiring experiences.”

DIRECT: Judy John, CEO & Chief Creative Officer, Leo Burnett. Judy John was ranked the #1 Creative Director in Canada in Strategy Magazine 2014 and is responsible for leading the Leo Burnett #LikeAGirl campaign – now a multiple award winner. “It’s an incredible honour to be the first Jury President for Canada. I’m looking forward to the discussions around the inspirational work with a world class jury.”

FILM: Tor Myhren, President & Worldwide Chief Creative Officer, Grey. Famed for the overhaul of Grey’s creative output with campaigns like The E*Trade Baby and DirecTV, Tor has been chosen as one of Fortune Magazine’s 40 under 40 (2011) and Fast Company Magazine’s Most Creative People in the Business. “Every year Cannes Lions sets a new bar for global creativity, and being president of the Film jury is thrilling. I continue to believe that even in the digital age, film remains the most powerful form of storytelling. We will look for what’s truly “new” and reward brave and remarkable work. I can’t wait.”

FILM CRAFT: João Daniel Tikhomiroff, Founder, Partner-Director, Mixer, Brazil. A constant performer at Cannes Lions, João Daniel has taken home 41 Lions to date making him the second most awarded director in the history of the festival. “From the script to the sound, craft is the structure that supports an idea. In a world overflowing with information, engaging the audience is becoming increasingly challenging. But that is exactly what I will look for. By achieving excellence in craft, we can actually touch people and make them cry, laugh, think, change. The idea is the soul. With a body, it becomes alive.”

MEDIA: Nick Emery, Global Chief Executive Officer, Mindshare Worldwide. Emery’s first 25 years in global media took him to LA, Valencia, Madrid and London. As a result of this journey, he now lives in some hybrid of NY, London and Shanghai, is married with two children and has an unrivalled knowledge of the world’s toyshops and dog emporiums. “It is our responsibility, and that of the Cannes Lions awards, to champion media at its very best – not just the glitz and glamour, but the connection of data, insight and execution that makes media so compelling. Everything today begins and ends in media. Media is fame and money, ideas and accountability, Hollywood and A Beautiful Mind. Our duty, and what Cannes Lions should represent, is the challenging of the status quo, the provocation of creating new things and not just counting what we already know.  Cannes Lions is a celebration of technology, content and invention, and the Media Lions sits at the centre of that world.”

MOBILE: Joanna Monteiro, Vice President Creative Director, FCB, Brazil. Co-winner with Max Geraldo of the 2014 Mobile Grand Prix for Nivea ‘Protection Ad’, Monteiro was recently named Business Insider’s Most Creative Woman in Advertising and is among the 10 most awarded Creative Directors in the 2014 Cannes Report. “It’s a true honor to have been selected as president of the Mobile jury, a category that unleashes great potential for creative work. In a time when dialogue between brands and their consumers is crucial, there’s nothing better than mobile.”

OUTDOOR: Juan Carlos Ortiz, President & ceo of DDB Latina & Creative Chairman of DDB Americas, Colombia. The first Latin American to become president of a USA-based advertising agency, Ortiz also won Colombia’s inaugural, and to date only, gold Film Lion. “In life and during my career, I’ve always believed that the simplest things can also be the most meaningful. If you stop for a moment and think about it, everything falls into human nature, human insights. Outdoor has always represented the magic of simple ideas, ideas with real power. It’s an honor to be judging this year in this category as one of my main expectations is to see how we as creatives, have evolved and can apply things such as technology within the DNA of our human insights and see them reflected in the real world.”

“What a thrill and a privilege to chair the jury responsible for selecting the year’s most inspired public relations work from all over the world.  PR is at the heart of the world’s greatest campaigns.  It’s a highly dynamic discipline that is constantly elevating its power by making emotional connections, revealing human truths, opening minds, touching hearts and inspiring action in ground-breaking ways. The 2015 Cannes Lions showcase is set to be the richest, most creative yet.”

PRESS: Pablo del Campo, Worldwide Creative Director, Saatchi & Saatchi. Not only one of the most awarded Argentinean creatives, del Campo is also founder of Del Campo Saatchi & Saatchi; an agency that ranks consistently high including in the Gunn Report’s Most Awarded Agencies. “In an industry transformed by new media, print still represents the toughest creative challenge. Print has only one sensory dimension so the idea has to work hardest. Originality, simplicity and surprise need to combine to create a singular emotional moment, which makes this an exciting category to oversee.”

Highly awarded in the creative world, one of Matt’s best known hits was the hugely successful ‘Hashtag Killer’ campaign. “It is both an honor and a privilege to lead the Promo & Activation jury. Today, clients look towards work in this category to truly supercharge their brand promise. In selecting the work that will stand as a permanent record of excellence, my hope is to inspire both clients and creatives to push beyond their imagined limits.”

RADIO: Paul Reardon, Executive Creative Director, Whybin\TBWA Group Melbourne, Australia. As both a writer and Executive Creative Director, Reardon’s work has been recognised in every major international award show, including Australia’s first and only One Show Green Pencil and two Cannes Lions Grands Prix. In 2014, he was the Executive Creative Director behind the ANZ GAYTMs campaign that cleaned up across global award shows and won the Cannes Lions Grand Prix in Outdoor. “My criteria for judging work is pretty simple. I look for brilliant ideas that are strategically relevant and flawlessly crafted. The really, really hard part is finding those ideas. But that’s the exciting thing about Cannes Lions. The show is so big and attracts so much talent, you know that brilliance is out there, hiding amongst thousands of submissions. I’m honoured to be guiding the hunt in Radio in 2015.”

TITANIUM & INTEGRATED: Mark Fitzloff, Partner and Executive Creative Director, Wieden+Kennedy Portland. Famous for invigorating ‘your grandfather’s deodorant’, Mark was the executive creative director behind the legendary, Grand Prix winning, ‘The Man Your Man Could Smell Like’ for Old Spice. He’s helped ensure that Wieden+Kennedy has won the ‘Cannes Lions Independent Agency of the Year’ three times. “In 1998, I was shortlisted for an ad banner that I wrote for Microsoft. It was my first Cannes Lions award. And therefore the one that still matters most. What am I looking forward to as this year’s Titanium and Integrated Jury President? I think giving someone that same feeling would be pretty fantastic.”