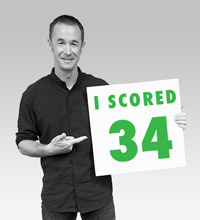 Men’s Health Week launched yesterday amid a blast of publicity that included primetime coverage on TV, and stories in all major newspapers, radio stations and news websites. Seldom has the spotlight shone so brightly on men’s health issues. The campaign sought to drive men to take the What’s Your Score test at menshealthweek.co.nz/survey. So successful was this that the evening news shows had to ask viewers to ease off on the logins, because the site kept crashing. (Ed scored 34!)

Yesterday, we featured a couple of the OOH ads here; today we’re running the radio campaign.

The radio spots will run until Sunday on Newstalk ZB, Radio Sport and Hauraki. The campaign involves body parts having a voice, again playing on humour to encourage men to start talking about their health issues.

The entire Speak Up campaign was created by M&C Saatchi before it closed permanently in April.

Men’s Health Week is supported with sponsorship from The Radio Network and APN Outdoor.