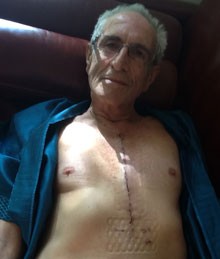 M+AD ed David Gapes is back in the driver’s seat after open-heart surgery a fortnight ago. “I’m quite proud of my battle wound, and felt strangely compelled to share it with the world,” he said. “I now have a scar to match that of my M+AD business partner Chris Grimstone’s son Johnny.”

Three weeks ago, Gapes (67) believed he was in rude good health. He had no symptoms and has never had a hospital visit in his life.

A routine GP checkup discosed a potentially serious heart problem (via a standard stethoscope check). “You’ve got a heart murmur,” the doc said. “A big one.”

Things moved very quickly from there, and 10 days later Ed was under the knife for a heart valve replacement at Auckland’s Mercy Hospital.

Back home, with more oxygenated blood powering through his system than ever before, he’s resumed his editor’s role with refreshed relish.

“I cannot, however, leave home for six weeks until the breastbone heals – so please don’t be pissed off by my absence at industry events before Xmas,” he said, urging contributors to “keep sending me the emails”.

Gapes’s surgeon was David Haydock; the cardiologist was Arthur Coverdale.